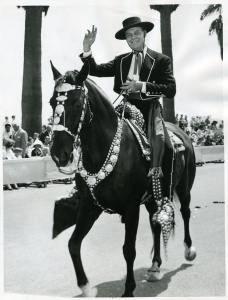 The Museum was pleased to play a part in the Old Spanish Days Fiesta entry in the 2015 Tournament of Roses Parade. The equestrian display recreates one of the most famous weddings in California history, the wedding of Anita de la Guerra of Santa Barbara to Boston hides trader Alfred Robinson (chronicled in Richard Henry Dana’s book “Two Years Before the Mast”). One of the riders playing the role of father of the bride, Dennis Rickard (El Presidente 2014), proudly rode his grandfather’s Louie Ortega silver saddle, on loan from the Museum. Our sincere congratulations to Old Spanish Days!

iThere are no comments

Begin typing your search above and press return to search. Press Esc to cancel.